Murati and Mordan will push their opponents to the limit 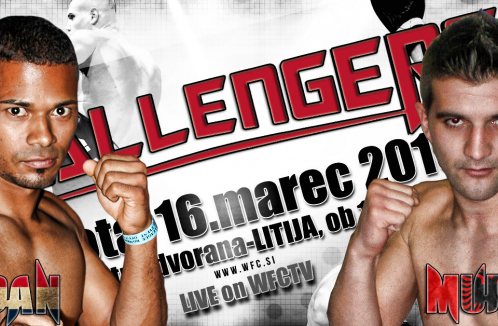 We are just one day away from Challengers 4 in Litija, Slovenia. Tomorrow around 9 PM everything will be decided and maybe a few brave and talented fighters will sign contracts with WFC.

Arber Murati and Jeffrey Mordan both live in Italy though they are from Albania and Dominican Republic. For both of these men Challengers 4 will be thier debut fight under WFC. Mordan who fights in lightweight division will face Jakob Poschner from Austria.

Poschner, a Jiu-Jitsu practicioner, wants to take another step in his career with a win on Challengers and believes that Mordan won't stop him. Mordan who fights for Advanced Team from Pordenone has the same goal: "I want to sign a contract for the main events and I'll do everything in my power to achieve that!"

He's a boxer but has transformed into a true MMA warrior in a last couple of years. These new age fighters are much more diverse than back in the old days as they train every aspect of the game since the beggining. Jeffrey promises a good fight tomorrow and is confident that he will take all the glory.

Arber Murati on the other hand is an Albanian living and training in Verona, Italy. He has already fought with some fighters that have WFC and Challengers experience so he knows what to expect tomorrow when he steps in the ring.

With a professional record of 3 wins, 3 losses and 1 draw he will step in the ring tomorrow to face Aleksandar Rakas from Croatia. It will be Aleksandar's second apperance at Challengers where he previously won against Sinigoj at the first event. Now he'll be looking to make a more permanent stay but that is something Murati won't agree with.

"WFC is a big oppurtunity for me and my family. They support me 100% and they give me strenght to fight. I want to thank them with a victory and if possible with a WFC contract in my hand."

Murati prefers ground game and it will be interesting to see if Rakas prepared for that. There is no better way of finding that out than that you buy a ticket and see it for yourself.

Support these young fighters and come to Litija tomorrow. Hard weeks of training are behind them, now they are eager to show you what they have learned. Don't miss out on an oppurtunity to see future stars of WFC!