Poschner: "It's going to be an entertaining and skillful fight to watch!" 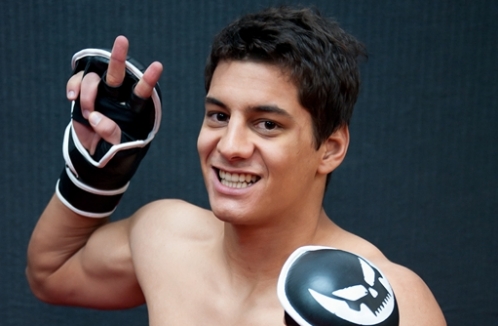 There will be quite a few Italians in the ring at Challengers 4 but Jakob "Pishtaco" Poschner will be looking to defeat one of them. In a lightweight battle between Poschner and Mordan from Italy someone will take his first victory in the WFC.

With professional score 2-0-0, Poschner, a member of MMA Vienna, will be looking to take another step in his career and make himself known across the Europe.

He started his martial arts career with traditional Jiu-Jitsu and because he was very interested in martial arts in general. "I saw some Pride fights on Youtube, especially Kazushi Sakuraba's and Genki Sudo's fights and I was immediately stunned and attracted to what these fighters do. I couldn't believe it, especially the highlight reels on Youtube, which seemed to be out of a movie and not from an actual sport. That's basically when I decided that I want to do that too."

Jakob is of Peruvian descent and that is where his interesting nickname "Pishtaco" comes from. His mother is from Peru and also his headcoach Jorge Balarin. "In Peru there is this myth of an evil monster like man who they call Pishtaco and this man kills humans to steal their fat and sell it for a lot of money or other stuff. It's basically a myth out of fear of white men from the Indians. And one day people in the gym started to call me like that just out of fun and this nickname hold on to me," explained 24-year-old Austrian.

It a lot easier to be involved in a sport that you love if your family supports you. That is the case for Jakob who's lucky that his family stands behind him 100%. "It's not like they like what I do, but they support me in whichever path I take. So, I'm very thankful to my mother and father. They also always hope that I don't get injured and at the same time they hope that my opponents don't get injured as well." A true spirit of sportsmanship even from his parents.

MMA scene is not as big in Austria as it is in some other European countries. "Well MMA is for sure not mainstream here but I guess everybody who is interested in martial arts in general knows MMA. Especially the younger generation is aware of it. I wouldn't call it a big scene but it's growing day by day. For sure also because of such great fighers such as Mairbek Beckan Taisumov."

Poschner is at the beginning of his career and is on a mission to prove himself on the bigger stages. WFC Challengers is another step in his career which he has to take if he wants to make it as a professional fighter. "WFC is a quality MMA event. I know that they are strict with the weigh-ins, if a fighter is supposed to show up with 70kg he must do so. I've seen events where fighters showed up with 7kg over the limit and the organizers didn't care at all. And this happened to me too."

That certainly will not be the case on 16 March in Litija when he will face Jeffrey Mordan from Italy. He's training a lot and taking his MMA skills to the next level in general. There will be no special preparation for his opponent of whom he has seen just one fight on the Youtube.

Jakob trains two times a day as he prepares to take his career on another level. Thai boxing and Brazilian Jiu-Jitsu specialist is coming to the Challengers well prepared and promises an entertaining and skillful fight to watch.