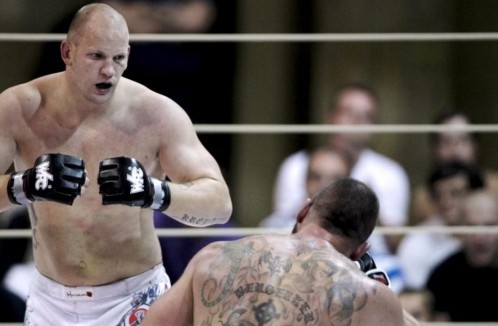 Heavyweights in Slovenia are hard to find but WFC has one under its wings. Rok Kokotec comes from Lasko, small turist town in Slovenia, where he made his first steps into the MMA world but he soon overgrowned it.

"I started training intensively somewhere in summer of 2011, before the first apperance at the WFC. I applied for a spot at WFC Challengers and won my first fight." His role models and inspiration are two of the greatest fighters of all time, Fedor Emelianenko and Mirko Filipovic who just recently offerd Kokotec a spot in his training team.

Positive, vibrant and always in a good mood are the characteristics of Kokotec who's paving his way of becoming a professional fighter. "Bullterrier somehow describes me the best, I'm sturdy, have a strong will and I'm fearless. And a little bit crazy, of course!"

Kokotec isn't training on his own any more but has a team of coaches around him that help him with his stand-up, cardio and his ground game. It's something that every fighter needs if he wants to succeed among the professionals.

Nearly a year has gone by since his last fight, even longer since his last WFC apperance. But Kokotec has a goal in his mind that he wishes to fulfil. "It is true, it will be almost a year and a half since my last apperance at the Challengers. I'm coming to show you what I've learned in the meantime, how much I've progressed. But if it's time for me to settle down in WFC will be decided by Zlatko Mahic."

"I strive for progress, to the fact that I beat myself and improve at the same time. If I can accomplish that I can beat anyone who stands in my way. I enjoy training MMA and the fact is that this is the most complete sport, mentally and physically. However if after all that you can still fight with the best that is even better."

Kokotec is working on all segments of MMA in his preparation for the Challengers 4 but his biggest advantage in his own words is his head. He has made a progress in this segment and that could be the decisive factor in three weeks time when prospect gather in Litija.

WFC's current heavyweight champion is Nandor Guelmino who won his title roughly 4 months ago and signed with UFC after the New Year. Everyone will be on the hunt for that belt when Nandor returns in the WFC ring. Kokotec would like to become one of the challengers in the near future and attack the throne. "WFC heavyweight championship belt is definitely on my to do list!"

Be a part of Challengers 4 and get your tickets at Eventim.