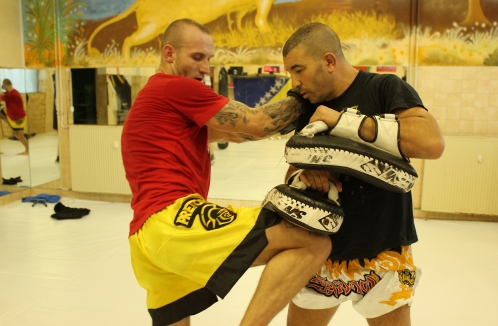 Christian Draxler will challenge Vaso Bakocevic for the WFC lightweight crown on December 20th. It will be his first stint in the WFC and what an introduction he'll have. Draxler, will go up against much more experienced Bakocevic. But it looks like that Draxler is not impressed by his opponents score.

Vaso didn't spare him from day 1 but it looks like that Christian is unaffected by his outbursts. He took the high road and did not wasted his energy with prefight shenanigans.

But nevertheless, this time he didn't miss out on a oppurtunity to poke Vaso. Vaso's height was mentioned but for more check out this short video footage of Draxler's training in Ljubljana. He's staying in Ljubljana and training for his title fight at Mury Derbal's gym.

No question about it, we will deliver you Vaso's response. Stay tuned for more as this battle intensifies.