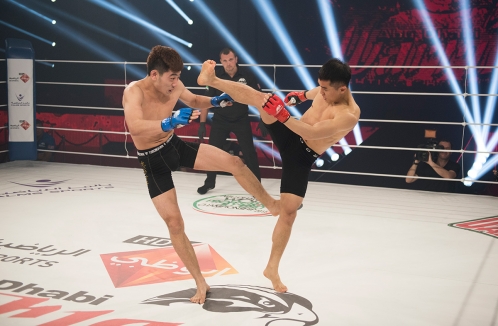 Warriors returned to Abu Dhabi with a featherweight opening between Yuan Ye (China) and Yun Ho-Young (South Korea). These two fighters opened the event and also a new chapter in AD Warriors history.

Ye (1-1) presented a big obstacle for his South Korean opponent as he had a significant height and reach advantage. An advantage that he wisely used through all three rounds of this interesting fight. China’s MMA scene is growing bigger and bigger every year and with a market so big, we can expect a rush of fighters from the Far East in the near future.

The Chinese fighter totally dominated this opening fight at AD Warriors 2 and deservingly took the honours after the final bell ring. Ye’s stamina was truly on a high level as he pressed on Ho-Young for 15 minutes of all three rounds. But his opponent on the other hand proved to be rock solid as he overcame all of Ye’s attacks and brought the fight to judges’ decision. After three difficult rounds Ye took the win via unanimous decision.

It was Ye’s first time outside China and what a visit that was! ″It was my first time abroad. I would like to thank my team and of course, AD Warriors organization, for this opportunity of a lifetime! I loved every minute of it. I would like to come back in the fall and compete at ADW 3.″, Ye described his first impressions after his well-deserved win and first professional career victory.

‘’They (the organization) let us live in a 5-star hotel for five days prior to the event. Who does that nowadays? Truly an amazing experience and even though that they’ve changed my opponent due to an injury, I managed to prepare myself mentally and I was confident I can win no matter what.″

Ye was a bit disappointed after his fight because he couldn’t follow his game plan completely. ″I was planning on taking him down, wear him out and submit him. I failed and I feel a bit disappointed but the winner’s trophy has improved the mood a bit.″, Ye joked a bit after his 15 minutes of war.

Determined that he’ll be back soon, he has a wish of his own. ″I want to fight against a Japanese fighter the next time I’m here. The Japanese have the best fighters in Asia, I want to challenge one of them and defeat him!’’

We will have to wait a bit till the next show, but when AD Warriors return, be sure to look for young and hungry for success fighters like Ye. They are the future and from where we stand now – the future looks bright!