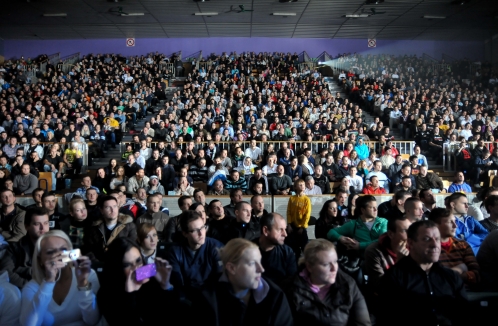 Headquartered in Slovenia, WFC has been organizing events throughout Europe for nearly 10 years now. Numerous events were produced during these years, 25 to be exact. The last one was just weeks back, now we are shipping our expertise to the Middle East as Abu Dhabi Warriors 2 awaits.

The jubilee 20th edition of WFC main events later this year will round up a magnificent ride that we've been on together with our fans and supporters. Let's reflect back over the years of significant moments in WFC history up to this day.

Founded in 2006, World Freefight Challenge offers the premier series of MMA sporting events throughout Europe. The WFC is well regulated and recognized as one of Europe’s most prestigious MMA organizations.

After first four successful events in Slovenia it was time to organize an event abroad. In just a few days we sold out an arena in Dubrovnik, the most luxurious coastal city in Croatia. After the success of the show that was produced abroad we moved to Bulgaria's capital, Sofia. All first 7 events were broadcasted on Eurosport.

Last few events were held in Slovenia. Popularity of the WFC grew enormously so we decided to produce a feeder series of events called Challengers. We opened the door to young, success-hungry mixed martial arts fighters and offered them the opportunity to enter into the world of professionals. Through the first three events we obtained some regular WFC fight card participants such as Vaso Bakocevic, Leonardo Zecchi, and Arbi Mezihov to name just a few. After their wins at »WFC Challengers« they got their spot on WFC main events and an oppurtunity to shine in front of large audience across Europe. Today we have a Challenger contestant that holds a WFC Lightweight title belt!

In 2012 WFC established a new brand called Abu Dhabi Warriors for our client from United Arab Emirates. Professionally executed project secured us a contract in UAE and in March this year we will continue with production of Abu Dhabi Warriors in UAE.

WFC 16 took the title of the best attendance when over 7,000 spectators gathered in Hala Tivoli, Ljubljana, to witness one of the best events to date. Bob Sapp was a magnet that filled the arena.

Our goal stayed the same through all these years. We offer young guys a chance of realizing their dreams of becoming top athletes in one of the world's fastest growing sports. First 10 years were terrific, let's make the next 10 even better!