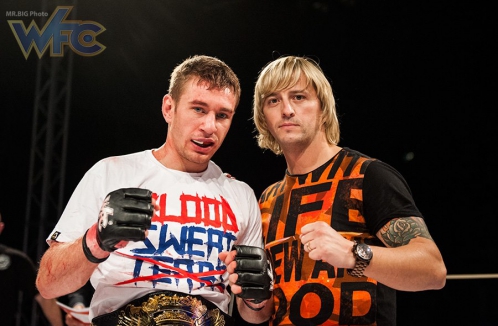 Hallmann was originally scheduled to make the first defense of the title he won with a second-round stoppage of Montenegro’s Vaso Bakocevic at WFC 17 on December 14 against former DEEP Lightweight Champion and Sengoku Lightweight Tournament Finalist Kazunori Yokota from Japan. Now he will face former Jungle Fight Lightweight Champion and “The Ultimate Fighter: Brazil” contestant Francisco “Massaranduba” Trinaldo at UFC Fight Night 28 on September 4 in Belo Horizonte, Brazil instead.

“Piotr has been an outstanding champion for us and was very well-liked by the WFC fans”, says World Freefight Challenge President Zlatko Mahič. “Of course we would have liked to see him defend the belt at least once, but at the same time we understand his dream to compete with the best fighters in the world and we did not want to stand in his way doing that. We’re wishing Piotr all the best for the future and we are sure that he will be a worthy representative for WFC inside the UFC Octagon!”

Even without the Polish star, the vacant lightweight title will still be up for grabs at “WFC 19: Savov vs. Bratovz” on December 14 at the Hala Tivoli in Ljubljana. In the main event, Bulgarian WFC Middleweight Champion Svetlozar Savov will try to make the second defense of his title against a familiar foe: Bor Bratovz has won four of his last five fights since facing the Bulgarian at WFC 15 and has earned another shot at the champion. Tickets will be on sale at Eventim.si and all booking offices in Slovenia soon.