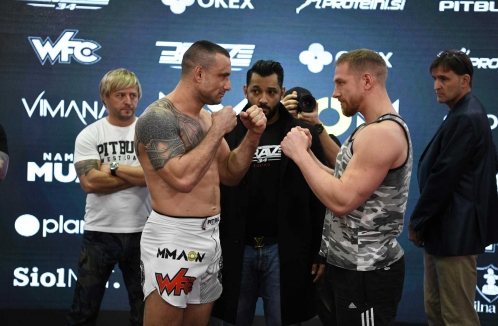 WFC and BRAVE CF are one day away from making history for the Slovenian mixed martial arts scene which takes place at the Tivoli Hall, in Ljubljana. This Saturday, the promotions put together the ceremonial weigh-ins, the last chance for fighters to stare down their opponents before fight night. And the athletes made the most of the occasion, as they used the weigh-ins to stir up their opponent, as it was the case with Monika Kucinic. As she looks to get her professional career underway with a victory, the Slovenian fighter went head to head with Jennifer Trioreau and shoved her French counterpart with her own forehead, marking a tense moment.

Elsewhere, there were a few other tense staredowns, especially between Middleweights Phil Hawes and Iuri Fraga. On a lighter note, Bojan Kosednar made everyone present at the weigh-ins laugh as he took out his own mobile phone and struck a selfie with opponent Tonci Perusko.

WFC - BRAVE will be headlined by a WFC Heavyweight title fight as Luka Podkrajsek and Viktor Vasic look to take home the vacant belt, with several stars taking on the Balkans' best fighters in a fight night to never be forgotten for the region.