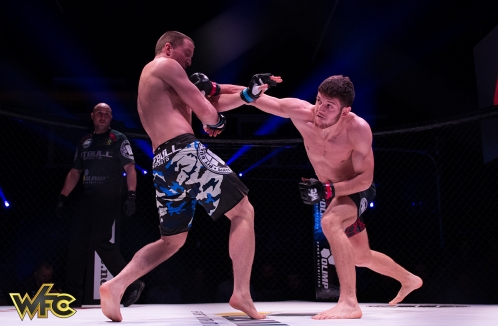 History was written on Saturday in Austria as the WFC 21 ended without a single fight that went to a decision. Truth be told, that had happened before, but back then the WFC events hosted also kickboxing fights and this was a first all MMA event that ended with finishes in all fights. All 7 of them ended in less than 15 minutes, as a matter of fact, all of them ended before the start of round 3!

The last event that was as action packed as WFC 21 was WFC 15 that was also sponsored by OLIMP Sport Nutrition back in 2011. This time around fans that gathered around the cage enjoyed in an action-packed evening that ended with a boom. But first thing first, it all began with a middleweight bout between Pascal Kloser and WFC Hall-of-fame member Vaso Bakocevic.

This was Vaso’s 40th professional career fight and on top of that, he made his middleweight debut on Saturday. WFC’s lightweight champion mainly fought at 66 and 70 kg in his career but this time entered the cage with a much heavier figure than usually. He weighed in at exactly 84 kg a night before. Facing a higher opponent is nothing new to Vaso, but Kloser was in much more familiar waters than him. Bakocevic jumped at his opponent as soon as referee Amidi started the fight and pressured the Austrian early on. He showed strength and didn’t allow Kloser to inflict his tactic onto him. It took Vaso under 2 minutes to finish the fight after he threw some powerful punches to an opponent that was not even actively defending himself.

In fight number two we have seen Austrian Ayub Gaziev versus Italian Luca Puggioni. Although Puggioni is almost 2 years younger than Gaziev he is much more experienced as this was his 24th career fight. In comparison it was only Gaziev’s 4th professional fight but that didn’t stopped him from inflicting pain on his opponent and secure his third victory in a row. Though it didn’t look like that in the beginning. Luca opened the fight strong and landed some vicious middle leg kicks that certainly did some damage. Gaziev seemed unfazed with it and waited for his shot. It came around 50 seconds gone into the first round as he grabbed Puggioni’s leg and wrestled his way into a dominating position. From there on it was all Gaziev who didn’t allow the Italian to turn the fight around. Referee Sam Amidi had to call it to a stop with 28 second remaining in the first round due to ground and pound.

It was time for heavyweight in fight number three with Viktor Vasic (BiH) challenging Mate Kocsis (Hungary). The Hungarian fighter was much heavier than his opponent at the weigh-in but the weight advantage did not help him in his WFC debut. Vasic, who also debuted under the WFC banner, came out strong, averted all heavy punches from Kocsis and proved that he could be an interesting asset for the WFC roster in the future. Cristian Brinzan and Sado Ucar notched their wins respectively and moved up the WFC rankings. Brinzan, who returned to the WFC after his loss against Bakocevic back in 2012 at WFC 16, recorded another first round victory and is undefeated since September 2012. Ucar also continued his winning streak in the WFC with a submission win over Vardjan. It was an interesting between the lightweights though the Turkey-born Ucar prevailed for the most of it. After the fight he expressed his wish to challenge the best lightweights in the promotion.

The co-main event of the evening featured Austrian wonderboy Ismail Naurdiev and Laszlo Szogyenyi from Hungary. It’s fair to say that it was not the night for the Hungarian fighters as Laszlo had a hard time fighting against Naurdiev. The Austrian prospect took the initiative from the beginning and proved to the MMA fans that he is certainly a fighter to look close at in 2017. Szogyenyi was one of the few that even survived the first round against Ismail who has 7 career wins with stoppages in the first round. The Hungarian sure proved to everyone that he has a heart of a warrior but that was not enough in the end. All those hard and precise punches took their toll on top of a battering ground game from Naurdiev. He almost sucked the life out of his opponent and forced him to surrender in second round after a series of hard knees and punches to the body and head. Naurdiev proved his worth and is a big step closer to a KSW debut in 2017.

In the main event of the evening, the fans went totally crazy when their favourite walked towards the cage. Hometown hero Christian Draxler made his WFC return after he lost a title fight against Bakocevic two years ago. He nearly debuted in the WFC with a win and a belt but had to eventually congratulate Vaso who won after a unanimous decision. This time Draxler faced another fighter from the Balkans and a team mate of Bakocevic, Aleksandar Jankovic.

Neutral fans were expecting a nervous fight from both sides but in the end it looked like Jankovic had harder time coping with the pressure. Draxler struck immediately and put pressure on the opposing fighter. But Jankovic looked focused at an early attempt from Draxler and even took the top position as the two went to the ground. But when Draxler fired some well-landed shots from the back Jankovic stood up and almost sealed his fate already in the first round. There were some promising submission attempts but Draxler just could not finish him. The round ended with Jankovic laying over Draxler in a top position but without any serious damage to the Austrian.

The second round was also the last round. In the first few seconds it was again Jankovic who looked more active and effective but Draxler’s ground game was just too much for him to cope with. To the delight of fans that gathered in the Austrian MMA Academy their admired friend sealed the deal. Draxler forced Jankovic to tap after a tight rear naked choke hold.

With all 7 fights ending prematurely WFC 21 – Olimp: Road to KSW was truly a spectacular ending of 2016 and a great forecast for the year that is ahead. Some of the fighters featured on the WFC 21 made strong statements and could be looking to make a step forward very soon. Stay tuned to WFC social media and website for future announcements and news.