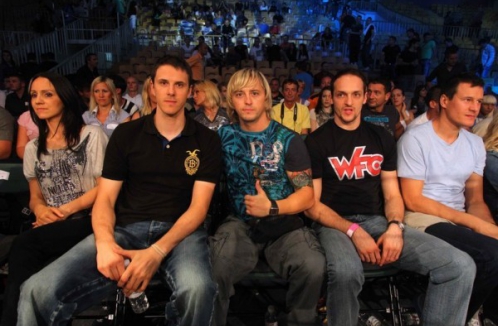 WFC 18: Knockout is fast approaching so we gathered a few oppinions from the men that work on and off the scene.  Gasper Bolhar, WFC ring announcer, believes that home guys will have a slight advantage in the fan base. ''Last results gave Bratovz a pretty high self esteem and after a quick KO at an Australian event he had more than enough time to prepair for the upcoming fight at WFC,'' stated Bolhar.

Will Vanders has a ton of experience in the world of mixed martial arts. He's been with WFC for quite some time an has full insight in the talents under its domain. He has his eyes set on all three main fights of the evening. "Nakanishi has been hardly seen outside of Japan so this is a rare opportunity to see this Beast of the East. With a history of TKO’s and KO’s this is a recipe for a war soufflé!" But on the other hand he gives his props to Rodja and believes that this just might be the cherry on top kind of battles. Mahteenko might have a slight advantage versus Tessari  as well as Bratovz against Ott. Home turf might just be the one ingridient that Ott will be missing on a Sunday night.

Will Vanders with the ring girls

Slovenian basketball player Bostjan Nachbar is a true MMA addict. WFC is on his every day menu and not a single fighter escapes from his sight. "In my opinion WFC 18 will be one of most exciting to date. Not just because of a talent loaded fight card, but also because WFC stage will be set in legendary Krizanke summer theatre in Ljubljana."

"I am hoping to see Chorchyp's hand raised when he faces Vidovic. Of course I support all Slovenian fighters on the card but I am especially excited about my friend Bor Bratovz back on the big scene as he faces dangerous Willi Ott. Hopefully we will see Bor's winning streak continue. In the main event we will see two established fighters. Aleksandar Rodja will try to be victorious in his last pro MMA fight, but Japanese star Yoshiyuki Nakanishi will try to spoil it for him. This should be the fight of the night!"

The third man in the ring as we like to call him, Grant Waterman has been with us for ages. "Rodja sometimes starts slow but this is a chance for him to show people his explosive striking and fierce ground and pound. He is world class but has been careless in the past and lost by submission to leg lock. Nakanishi, a submission specialist, will be aware of this and coming from a SAMBO background may be Aleksanders worst nightmare.

Second title fight of the night will be a mixture of emotions. "Mahteenko shows no emotion. He is like a robot who comes just to fight. Tessari can be exciting and a crowd pleaser. If the Italian can keep this fight standing and use the ring to set up his long range strikes we will be in for a very entertaining fight."

Bratovz and Chorchyp will have fans behind their back, but that is not always enough and Grant knows that. "Willi Ott is an intimidating figure and an experienced champion in Austria. Has PlayBor improved enough to step up to this level? This fight will have the crowd on their feet shouting for the local hero but Ott will not be fazed by that," stated Waterman.

"Gritko is unbeaten but has he steps up a level here to take on the very well rounded and more experience Slovenian Vrbinc. The Moldovan will attempt to take this fight to the ground to where he is more comfortable and will be determined to take his record to 4-0-0 but the Slovenian can fight anywhere. Another fight that you just cant call.

Waterman believes that Drmonjic is a man to watch but he has to believe in himself. ''If he turns up to this fight confident in his preparation and fights as he knows he can then Conti is in for a hard night. If Conti keeps the fight standing his striking will dominate but Marko's G'n'P is relentless if he takes the fight to the floor."

Derbal has 22 wins behind him with only 1 loss compared to the Grguric's 6 wins and 4 losses. "Don't be fooled into thinking this is a mis match as WFC promoter and matchmaker Zlako Mahic is a fight guru and knows that styles make fights. When the bell goes for this bout, don't blink."

In the opening fight we will see two highly experienced Kickboxers. Stankov will go up against Ilijevic. ''Let's hope they do not neutralise each others skills and give the crowd a fight to remember. After all, this ladies and gentlemen is WFC!"

WFC President Zlatko Mahic put his hart in this event. WFC in the historical setting of Krizanke summer theatre is a new stepping stone for the organization. ''For the fist time ever we will see a fighting event in Krizanke,'' stated Mahic. But that is not the only ''first''. "A fighter from Japan will debut in the WFC ring, it'll be Rodja's last fight – I'm expecting a masacre in the ring!''

Slovenian MMA poster boy Bor Bratovz will be put on a test, but Mahic is confident that audience will have something to talk about after the event. Both fighters are hard hitters so it will be interesting to see who will come out as a winner.

"I'm 100% sure that all three last fights on the fight card will end with a KO!'' Let's not forget that the undercard is filled with talent and that we will see a Slovenia versus Croatia showdown in the first part of the evening. ''This will be the biggest sporting event of the summer, that is for sure!''

They had their saying, now it's up to you to buy a ticket and join us in Krizanke on the 16th June for the 18th edition of WFC! Don't miss out on this fighting extravaganza and get your tickets NOW!