Vrbinc is ready for the battle 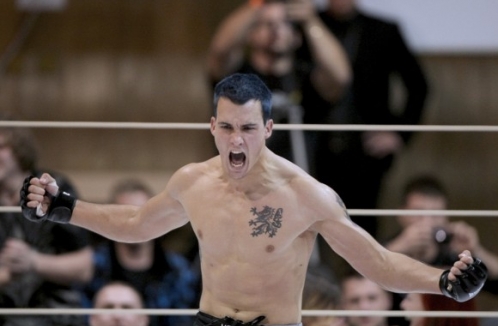 Primoz Vrbinc is making his way back to WFC at Challengers 4 as he replaces Ucar and will fight against Kokora. He hasn't been a part of WFC since WFC 15 when he was defeated by Mezdihov. That is his only loss in career so far as he holds professional record of 5-1-0.

Vrbinc commited to sports at a very young age but started training martial arts at the age of 18. "My parents were very much against any idea of me training a contact sport like karate, kickboxing or judo." MMA was just a natural transformation from martial arts and it looks like that he made the right decision.

Muay Thai and Brazilian Jiu-Jitsu practicioner fought at the first Challengers in Litija in September 2011. Now he looks to make his way back into the main events but first of all he has to prove to everyone that he's worth the shot. "It's been over a year since WFC 15 and since then I made some changes. I've changed my coaching team, I've changed the regime of strength training. I think it's time for my re-entry into the WFC and to show everyone that I belong there," stated 23-year-old from Ljubljana.

His family changed their mind over the years and are now supporting him 100% at what he does. "Family has come to terms with my career and do not see it as a beating of each other but as a sport. They stand at my side through victories as well as defeats."

Vrbinc had some other plans in March but when Ucar dropped from the fight card he took the oppurtunity to replace him and enter the ring with Danijel Kokora from Serbia. " Like I said, I've changed the way of training, I train every day twice a day, even on Saturday and Sunday! I think that I'm ready for the battle."

As a Muay Thai practicioner his legs are one of his most powerful weapons. He's not making any promises for the upcoming fight but he'll surely be looking for a victory that would bring him closer to the WFC main events.

"I don't know my opponent but I have seen clips of his fights. I'm working on my tactics for the fight which I'll refine in the last 10 days. I'll be ready, of that you can be sure!"