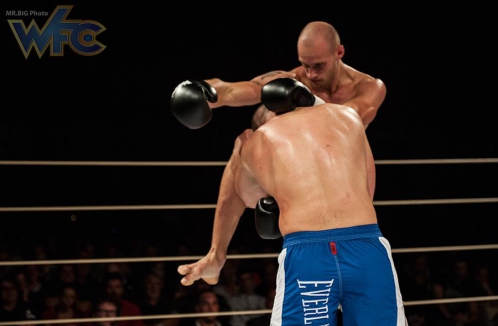 Uros Velicevic is being regarded as top Slovenian K-1 prospect and one of European best fighters in the light heavyweight division. After his debut appearance and win at Challengers 2 he faced Chorchyp at WFC 16 and won due to injury of his opponent. He notched up his third straight win at WFC 17 against Tucak who has proven to everyone in the Hala Tivoli that he’s a tough fighter that won’t go down easily.

But Uros was technically superior during the whole match and claimed his third straight win in the WFC. At WFC 18: Knockout he’ll be tested to the limits. He’ll go up against Bahrudin Mahmic who will be his greatest task to overcome at this point of his career.

Mahmic, one of the best Bosnian kickboxers, is making his debut appearance in the WFC and what a debut that will be! It might be a short career for him in the WFC if Velicevic steamrolls over him but that won’t be easy for the Slovenian fighter.

It won’t be an easy mission for Velicevic as Mahmic is coming to the WFC with one goal only and that is to make a statement. WFC 18: Knockout is something that you just can’t miss out on so get your tickets at Eventim.si and join us at Krizanke for a night of spectacular fights.