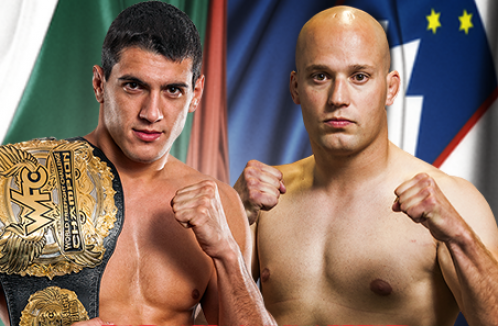 There are only a few fighters that are still undefeated in the history of the WFC and have fought more than just one or two times. Colossal achievement that is hard to accomplish if you're not 100% dedicated to this sport and top of the top at the same time.

Things will change for one member of this group in less than two weeks time as we will witness a battle between WFC's middleweight champion Svetlozar Savov (4-0) and contender Marko Drmonjic from Slovenia. Drmonjic is also 4-0 in the WFC and will face his toughest opponent in his career at WFC 19.

Drmonjic earned a shot at the title after Bor ''Playbor'' Bratovz had to pull of the fight due to injury that stopped him at his attempt to avenge his loss against Savov at WFC 15.

Challenger Drmonjic is in full training and has made a promise even prior to this match-up that he'll put on a show for the crowd. No doubt about it that we can expect a spectacular main event at WFC 19!

It will be long 10+ days till the event. With a card packed with potential stunners it will be a show that you just can't miss out on! WFC 19 PRETORIAN on December 20th at Kolosej BTC. Be there!