Top 5 welterweight's in the WFC 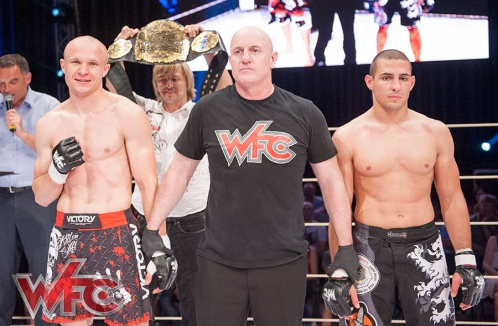 WFC 18: Knockout was a milestone for the welterweight division as we crowned our new champion, Jevgeniy ''Zena'' Mahteenko. Mahteenko who was born in Ukraine is fighting out of Prague, Czech Republic, for the last couple of years.

The throne that was empty since February is now occupied by an aggressive stand up fighter that will be hard to beat. Mahteenko who has 3 apperances in the WFC was on a two fights winning streak before entering the WFC ring nearly two weeks ago. His KO versus Tessari earned him the welterweight belt and now he's the man to beat.

Zena's countryman, Sergei Churilov was on a 10 match winning streak prior to WFC 17 in last October. After his first career loss he returned to the same old and notched up two victories that put him 12-1 in his professional career.

Gheorghe Gritko is a new face on the list but his dominant performance at WFC 18 rightfully ranks him at the no.3 spot. His tireless takedowns versus Vrbinc were spectacular and although he didn’t finish the fight before the bell rang, he won after an unanimous decision. It will be interesting to see him in action at next events.

Agujev and Pele Landy rank no.4 and no.5 respectfully. The duo has a ton of experience inside the ring and with a few wins in their next fights they could easily challenge the front-runners in the division.