The best pound for pound fighter in the WFC 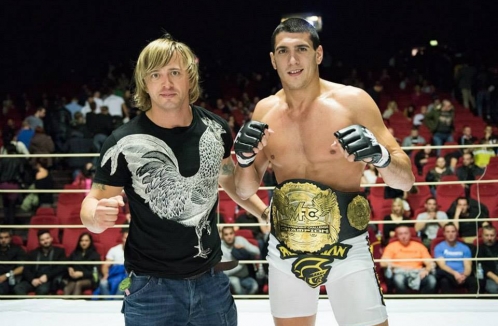 Svetlozar Savov once again prevailed on a night when WFC crowned two Champions. After his rematch with Bratovz fell through due to a injury Bratovz sustained during his preparation for the event, he had to face another Slovenian contender for the throne Marko Drmonjic.

But the fact that he had to face another man didn't bother him at all. ''No, the fact that Bor got injured and they changed my opponent just weeks before the event didn't affect me and my preparations for the fight. I continued to train hard, I've studied my new opponent and I think that I've proved to everyone that my training camp was perfect. I don't underestimate no one and I was 100% ready for the fight.'', stated Savov as he reflected on the fight.

Savov once again submitted his opponent in the WFC and is now 5-0 in his WFC outings. Being crowned as undefeated and undisputed WFC Middleweight Champion marked another success in his blistering career. But he has raised his game and feels as comfortable when standing on his feet as he does on the ground. ''Lately I'm working on my stand up because it's not as good as my ground game. At the moment I can say that I'm feeling comfortable no matter where the fight is!''

Savov is planning another stint in the US but that might be put on hold for a while since he signed a deal with Abu Dhabi Warriors and will fight in the Emirates at the end of March. But bigger and richer markets don't change the fact that Svetlozar is a humble and respectful champion. ''It's a great honour for me to be a part of one of the best MMA organizations in Europe and mostly being the champion of this organization!''

Truly a champion worthy of respect and a fighter with a stellar career in front of him.