The Balkan intimidator set for tussle at WFC 21 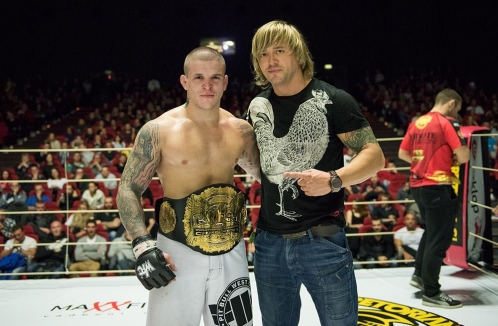 Vaso Bakocevic has been with the WFC for years. He debuted way back in 2011 just a year after he started his pro career. He established himself as one of the most energetic fighters in and outside the ring in the meantime. Bakocevic pours his heart and soul into fighting, a combination that is sometimes deadly even to him. Over the years he has been building his career and steadily making progress.

His first title attempt in the WFC came in 2012 when he faced Hallmann (10-1 at that time) who was at top of his form in those months. But Vaso showed tremendous heart and didn’t want to give up even though his head was severely cut. Hallmann proved his worth a few months after that fight as he started winning in the UFC. Vaso took his own path in between and fought all over the world and also made a few appearances in the KSW, Europe’s most prestigious promotion.

In 2014 he took the highly anticipated WFC belt at last when he defeated Christian Draxler at WFC 19. The current reigning lightweight champion made another appearance at this summer’s WFC comeback event in Austria when he secured a 3rd round TKO win over the experienced Yannis Jacquet.

Bakocevic’s fight at the WFC 21 – Olimp: Road to KSW will be his 50th professional fight and he’s been a pro for just over 6 years! Love him or hate him, his fights are always a crowd pleaser. So make sure you catch him in Bad Vöslau, Austria on December 17.