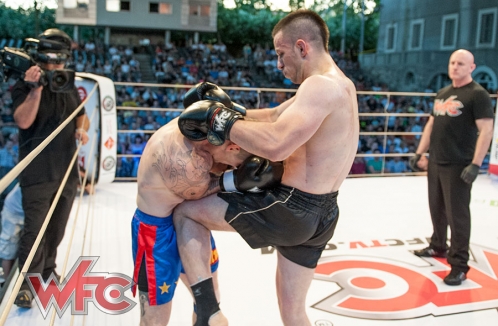 On December 20th we'll witness a middleweight superfight between Aleksander Stankov and Mury Derbal, top two Slovenian K-1 specialists. Both fighters have an enormous amonut of respect for one another but only one can come out victorious.

Stankov has lost one time before to Mury so this is a rematch he's been craving for. It looks like that this time Stankov will not underestimate Mury who proved to him that he's a terrific fighter with an iron chin. ''He's (Mury) is standing on my way, my dream is to beat him and take my career on a new level as WFC's undisputed K-1 king'', Stankov adressed the issue at hand.

''I'll be looking for a knock-down but on the other hand I'm ready for a three round slaughterhouse in Kolosej! Fans do not miss out on this event, come at Kolosej and support us. It's gonna be a nigh to remember.''

Mury versus Stankov is promising to be a hell of a fight. Both fighters show nothing but respect for each other outside of the ring but are eager to ignite the fireworks when the show starts.

Be ready for 10 attractive match-ups on a night when we will rewrite the future. Reigning middleweight champion Svetlozar Savov will defend his belt, Montenegrin “Psychopath” Vaso Bakocevic will go up against Austrian Christian Draxler for the lightweight throne and many more. Follow wfc.si and our social pages for additional info. Tickets are already on sale at the Kolosej BTC ticket office.