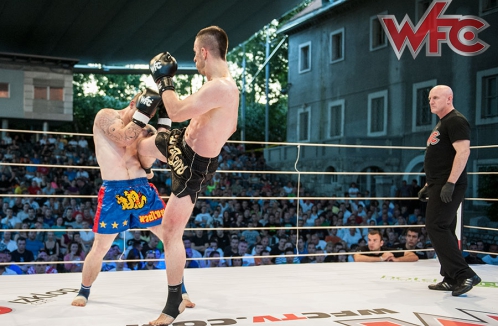 Aleksander Stankov made an electrifying WFC debut in his K-1 bout. He entered the WFC ring for the first time but made it clear that he's not going anywhere now. ''My plan was always to turn professional, to get to the WFC. Now that this dream came true, I've basically already set new goals. I want to stay in the WFC and not only that, I want to be the best!''

WFC 18 was set up in the historic settings of Krizanke summer theatre. Audience was delighted with the open air venue but fighters were no different. ''To compete in the open air venue felt truly special and I must say it was really an amazing experience. But all this without the audience would not be nearly as good. To compete in such an atmosphere it was something that can not be described, it must be experienced. The most beautiful thing I've experienced in my life,'' stated Stankov.

The crowd got Aleksander going as he entered the ring to go up against Mario Ilijevic from Croatia. ''To me personally, audience gives me that extra kick, that extra energy.'' And he must have got a lot of energy from the crowd as he went into the fight with full force from the very start. He blocked most of initial attacks from Ilijevic and slowly started to incorporate his own rhythm. He completely disarmed his opponent with a series of leg techniques and that eventually led to Ilijevic's retirement.

''I was very surprised at the moment they announced his retirement. A moment later I realized that in my opinion his corner took this decision because during the fight I got the impression that my opponent is a true warrior. Even when I landed a clean shot he sometimes nodded and went towards me, he wanted to fight and was clearly not scared. His corner probably just wanted to protect him.''

Stankov claimed his first WFC victory and positioned himself as a legitimate contender in the division. ''I would like to thank Mr. Mahic, WFC president, who gave me this opportunity! To fight in such an organization, in front of an incredible audience, is truly something that I have dreamt all these years. I believe that many fighters from Slovenia see WFC as the biggest motivation.''