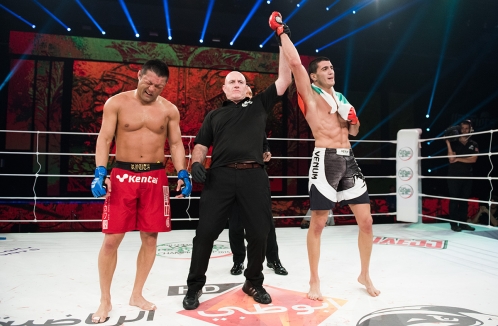 Svetlozar Savov is quite a big name in Europe, especially in the Eastern part. His professional record of 15 wins with 5 losses puts him up in the middleweight top flight. He’s been fighting mostly in European promotions, with one WSOF fight that went south. He still believes that his fight with UFC veteran Okami came a bit too early for him, but he didn’t back down. He didn’t back then and he’s not planning to period. At AD Warriors 2 he was matched with Ryuta Sakurai, another victim of Okami from the Pride days, a top level wrestler with over 50 professional fights in his career.

Sakurai who’s a PRIDE, DEEP and KSW veteran has an impressive career with 2 titles and numerous attractive fights. His accomplishments made him a Japanese MMA legend and one of the most respected MMA fighters in Asia.

Savov on the other hand is known for his good manners, true sportsmanship and can easily be presented as a poster boy for Abu Dhabi Warriors mission and vision. His respect for the opponents is felt in and outside the ring, but when the bell rings, he’s only one goal in front of him and that is victory.

″When an athlete achieves victory, then his work and preparations for the fight are justified and he feels satisfied as I felt after my match.″, stated Savov who will turn 27 later this year.

″As usual I studied my opponent and also his weaknesses. I trained hard for the match and I devoted special attention to endurance exercises, because I thought that the fight will end with decision.″

We all know that was not the case as Savov proved to be on a higher level than Sakurai that night. He ended the fight with an impressive Guillotine choke at the end of Round 1 and won for the third time in a row, in the last fights of his career.

″If I can speculate a bit, I would like that my next opponent is one of the winning Warriors from the ADW 2. In my weight class, don’t forget that.″ Savov concluded jokingly.

Over a decade younger Savov proved to be a too big obstacle for Sakurai. What’s next for him? If we look at the ADW 2 fight card, then he can be matched against Foupa-Pokam, Wallhead or Nunes. Whoever it may be, the fight would be a spectacular won. Let us wait and see what the future holds for Abu Dhabi Warriors.