Rodja retired as the first ever WFC light heavyweight champion 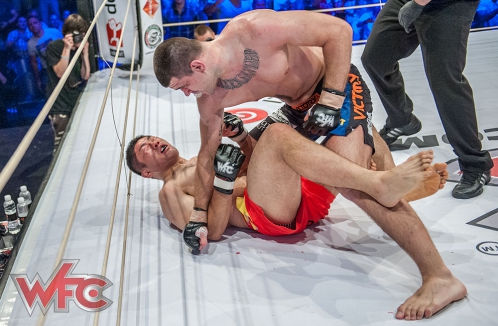 A week has passed but the emotions still run strong for Aleksandar Radosavljevic. Popular ''Rodja'' retired after last weeks WFC 18: Knockout that was held in the historical setting of Krizanke summer theatre.

But what an retirement party that was! Rodja faced Japanese Yoshiyuki Nakanishi, DEEP's light heavyweight champion and beat him severly. First round KO earned him the WFC light heavyweight title. Truly an impressive ending to a career that was built in the WFC. Rodja retired not only as a reigning champion but as a true WFC legend.

Radosavljevic vs. Nakanishi fight was ''crème de la crème'' at WFC 18. Both fighters were determined that it's their time to shine but in the world of MMA only one can be victorious. Rodja was the more determined one and he deservedly won the title.

With WFC record of 6 wins and 1 loss Serbian retired as the first ever WFC light heavyweight champion on a night that will be long remembered. Was that it for Rodja? Is he never ever coming back? Stay tuned with WFC.SI and read what the Champ has to say. Coming soon.