Rob Nutley: The man behind the mic 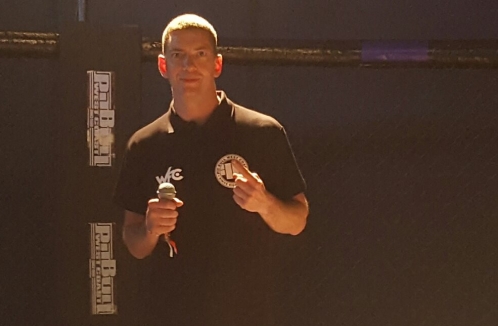 In many respects, it’s hard to appreciate the global phenomenon that mixed martial arts has become, especially when you look back at its chaotic genesis. Both fans and fighters alike flocked from the four corners of the globe to be a part of the fighting phenomenon that took the world by storm.

One of the most influential figures that put UK MMA scene on the map has to be one of UK’s finest commentating veterans and mixed martial arts aficionado Rob “Just the Job” Nutley.

His commentary has provided the perfect soundtrack to hundreds of classic encounters and it’s amazing to see that his passion for the sport is still as limitless as it was when he took his first fateful steps into the mixed martial arts history books.

You’ve been around the sport for a very long time, what is your first memory of martial arts?

RN: Wow! That takes me back when I was growing up my next door neighbour’s Dad was heavily into karate and I remember seeing a picture of him in a magazine and being amazed. He borrowed me the film Snake in the Monkey’s Shadow and that was it.

I was a seven-year-old running around the streets fighting like the drunken master! Looking back I guess I was also inspired by watching the original kung fu masters like the legendary Bruce Lee.

How did you originally become involved in the commentary?

RN: That was quite a strange thing really. When I first got involved with the Elite Fighting System gym I wanted to be involved in every aspect of martial arts so I used to write articles for Combat magazine and I used to run around backstage at events and open matt competitions interviewing fighters. I got a huge buzz out of it and I was lucky enough to fight at Cage Rage 1.

I absolutely loved it but the guy commentating didn’t really have a clue what he was talking about, I was then due to compete at Cage Rage 2 but unfortunately got into an altercation with some drunken idiot and broke my metacarpals on my right hand quite severely.

I had to pull out but Dave O’Donnell knew I had a passion for all things MMA and that I knew the game so he asked me if I would like to commentate it. Now I’ve done over 80 shows alongside Dave and I probably have one of the most recognised voices outside of the cage.

How far would you say that the public’s attitudes to the sport have changed over the years?

RN: That’s a good question and I believe it has changed a great deal, it’s a now a mainstream sport that is televised regularly on sports channels. This has helped to build a professional appearance for the sport.

I remember going back a few years discussing the sport with people and they would ask the most ridiculous questions like do you use weapons, or do you fight with dogs. It’s just unreal how the public perception was back then.

To be honest though, even with all the ground that Cage Rage laid to make MMA what it is in the UK, I still have to convince people that competitors are not all violent thugs that roam the streets looking for trouble.

Building fighters in the public eye with personal interest is the way forward; it gives the average person the opportunity to relate to these athletes on a different level.

Do you think that MMA fighters get the respect, on an athletic level, that they deserve from the public and from other athletes?

RN: I think so, when I first began MMA it was all about the perfect technique and being fit enough to go three five minute rounds but that has now changed and training has become a science for athletes at the highest level.

These guys train and put it all on the line just like any Olympic standard athlete. They have not only got training regimes to follow, but also strict diets and sessions where they may just work on certain muscle groups or escaping from a single position.

I have a lot of respect for the fighters that put in the dedication to train like this and it makes me wish I was 20 years younger so I could dedicate the time to it.

Did you ever think that the sport would reach the size that it has done currently?

Yeah definitely, I guess I had the vision and I have put in years of hard work behind the scenes to promote MMA here in the UK.

It was very difficult in the beginning but I always knew the sport would grow in popularity and I love that people have no idea that behind the scenes I helped to push the sport in this country to its current popularity.

Right now we are still educating people on MMA its origins and the athletes that compete, so we still have a long way to go.

What has been your favourite fight to commentate?

RN: Wow! There are literally too many to choose from. My top fights have to be Melvin Manhoef vs. Cyborg, James Zikic vs. Cyborg and Marius Zaromskis vs. Ross Mason. I was privileged enough to watch the rise of Anderson Silva and the lighter weight guys like Brad Pickett vs. Hideo Tokoro and Jean Silva vs. Masakazu Imanari.

I’ll also never forget commentating on legends of the cage like Tank Abbott and Mark Kerr. Kerr was one of the reasons I fell in love with MMA, also the likes of Shamrock and Kimo were a pleasure.

Is there any history to you getting the name Rob "just the job" Nutley?

RN: Well it’s kind of an obvious one but when I worked for Cage Rage it seemed that I was just the man for any job no matter how big or small and that’s kind of the same in life. Let’s just say if I can’t I probably know a man that can so it would seem I am "just the job" for any job.

Rob Nutley is an ordinary guy with an extraordinary set of stories. In this day and age of fighters slowly turning into superstars it’s incredible to think that he has commentated, trained and been involved with some of the biggest names walking the planet.

He's promoting a BJJ event in the UK on February 5th, 2017. Roll Models BJJ will go down in Stoke on Trent in the West Midlands in less than three months.

It’s a passion that comes through in everything that he turns his hand to and, as mixed martial arts takes the next step forward, Nutley will continue to make to bring his own inimitable, unbelievable style to the sport that he fell in love with many years ago.