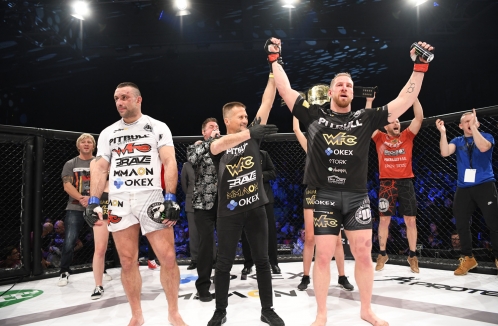 In partnership with the WFC, BRAVE Combat Federation made its first incursion in the Balkans in a packed Tivoli Hall. In the main event of WFC24/BRAVE CF 34, Luka Podkrajsek edged Viktor Vasic in an amazing main event and became the new WFC Heavyweight champion.

The two men fought with reckless abandon from the start as both Viktor and Luka traded hard blows in the opening minutes. Podkrajsek looked for a takedown and got it in the second round. In the final frame, however, Vasic was superior and nearly snatched the victory from the hometown hero.

In the co-main event, Benoit St. Denis made headlines with an incredible kneebar in the first round, getting his first BRAVE CF victory in style against game veteran Ivica Truscek. Meanwhile, Phil Hawes put the Middleweight division on notice as he called out BRAVE CF champion Daniel Gaucho after brutally knocking out Gaucho's countryman Iuri Fraga in the first round. "Daniel can get it. I'll see you soon, boy", simply said "Zilla" Hawes, as he continues his crusade towards the Middleweight world title with his second win in as many bouts.

In the opening fight of the main card, two of the best Flyweights in the world put on a clinic, as Velimurad Alkhasov and Zach Makovsky fought to one of the most even match-ups of BRAVE CF history. Makovsky won a split decision to derail Alkhasov's perfect MMA record and position himself near a title shot for the inaugural belt.