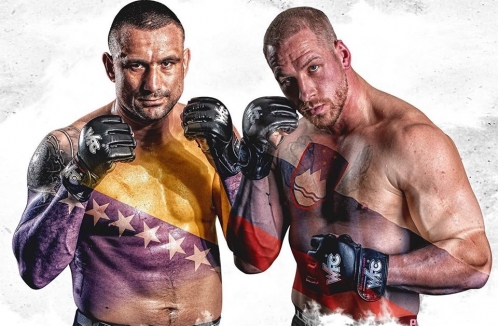 Luka Podkrajsek is one of the fans favorite fighters in recent years no doubt. The 30-year old heavyweight fighter has taken the division by storm when he signed with the WFC in 2017. His last two fights have been a walk in the park for him as he finished the fights within a couple of minutes. Podkrajsek is relatively a new name on the battlefield with his debut pro fight coming in less than two years ago. Since then he's been taking giant steps forward and will face his toughest opponent to date at WFC 24 - OKEx.

Viktor Vasic made an impressive debut at WFC 21 in Austria a couple of years ago as he KO'ed his opponent in 150 seconds. Vasic, one o the nicest and most humble guys outside the cage is coming to Luka's home territory with a clear goal in his mind - take it all from him. Winner of this fight will earn a chance to go after the heavyweight belt that is still in the possession of the former UFC and Strikeforce competitor, Nandor Guelmino.

The Austrian ruled the WFC ring years ago, now it's time for the new fighters to make their names in the cage! This time around there won't be any tangling in the ropes since the cage will offer much more fluid fights.

2020 marks a completely new chapter for the WFC with the recent announcement of the partnership with Brave CF and the introduction of the cage. Fighters that will snatch their opportunities in the fighting arena will trailblaze the new path into the future.