Nedoh in search of his 3rd win in a row 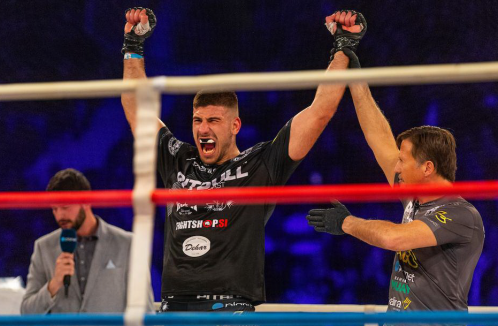 The one thing that Slovenia's MMA scene was definitely missing out on in the last couple of years was the presence of big heavy hitters. Now we have two of them under the WFC banner and both of them are ready to conquer the cage on January 19 when WFC storms the Ljubljana once more. While Podkrajsek is leading the way in the heavyweight division, Jakob Nedoh is paving his way up in the light heavyweight one.

The young Slovenian made his debut at WFC 23 where he submitted his opponent in the 1st round and notched his second pro victory in a row. A former handball player made the switch a couple of years ago and is now fully committed to making his name in the cages worldwide.

Nedoh is being regarded as a hot prospect due to his age and room for improvement while his athleticism has never been an ''if'' factor. He truly looks like a lean, mean, fighting machine that will rip apart his opponent in order to achieve his goals and dreams.

This time the man standing opposite him will be Zarko Sedoglavic from Serbia, a newcomer on the scene. Fighting out od famous Car Dusan Silni Gym from Serbia, Sedoglavic made his pro debut early this year and will be looking to crush the streak of Nedoh when the two will collide at WFC 24 - OKEx.

Be sure to grab yourself some tickets before they run out as the events approaches at lightning speed. Visit Eventim.si for more info about the tickets.