Nedoh: A star in the making 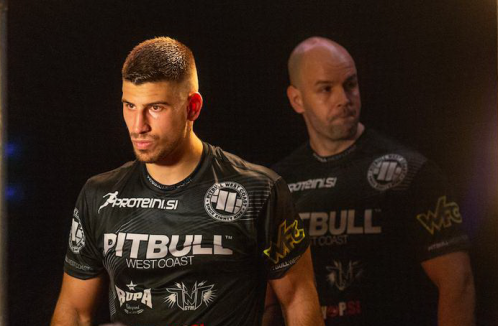 Jakob Nedoh 's young age and determination to make it in the business are two key factors that make him one of the brightest stars in Slovenian MMA. 23-year old ex-handball player is returning to the WFC for the second time around on January 19 next year. His debut fight for the organization was one of the best that evening, Nedoh's power and skill set was too much for his opponent as he finished him with a slick submission in the first round.

For his next fight at the WFC - BRAVE event in Ljubljana he'll be facing Zarko Sedoglavic (Serbia) from one of the best gym's in the Balkans, Car Dusan Silni from Belgrade. Serbian gym has a long history with the WFC, some legendary fighters established themselves through the fights within the organization, especially with Aleksandar ''Rodja'' Radosavljevic who became WFC Champion in his last pro fight in 2013.

Nedoh on the other hand trains in T'N'T gym where his training partners include such names as Luka Podkrajsek, Marko Drmonjic and Uros Jurisic. After initial years when he switched from handball to MMA and fought a dozen amateur fights, he moved to Ljubljana and started training professionally. Now he's fully committed to both, study and professional MMA fighting, and ready to make a statement in the cage.

Take a look at Jakob's last fight at WFC 22 and make sure that you grab your ticket in time and join us at WFC - BRAVE event on January 19 in Ljubljana, Slovenia. Tickets are available at Eventim.si and Petrol gas stations all over Slovenia.