Nakanishi turns into a beast when he enters the ring! 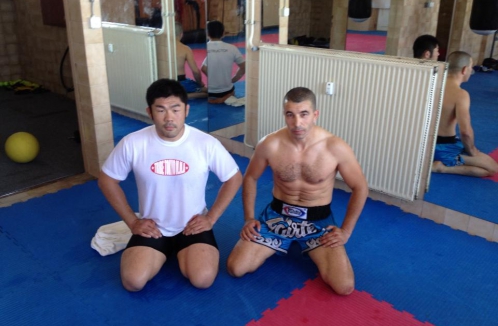 Fight for the light heavyweight title is looking up to be a bout for the histroy books. Rodja's last fight in his professional career might be the thoughest one he had till the date. Japanese warrior Yoshiyuki Nakanishi is determined that he'll have the last saying.

Nakanishi arrived to Slovenia on Wednesday to prepare himself properly for the fight at hand. His staying in Slovenia is filled with training and a bit of sightseeing. He's been a regular guest at Simba Gym which is run by Mury Debal who'll also be fighting tommorow. Derbal's gym is a perfect fit for Nakanishi who's in top form and is not taking any chances. Nakanishi adpated quickly to a different time zone and is more than ready to take the stage tommorow.

But training hasn't been everything that he has been doing the last few days. WFC made sure that he has everything at his disposal. We even took him on some sightseeing to the beautiful Lake Bled so that he could loosen up a bit. He socialized with WFC fans in Slovenia, gave autographs and took pictures with them as you can see on the attached pictures. Truly an inspiring fighter that turns into a beast when he enters the ring.

We will have to wait till tommorow to see who will be the new WFC light heavyweight champion when Rodja and Nakanishi go up against each other. We count on you to be there so get your tickets before it's too late! Available at Eventim.si, Petrol gas stations and Posta Slovenije branches around Slovenia.