Mehmen: ''I'm coming back in September!'' 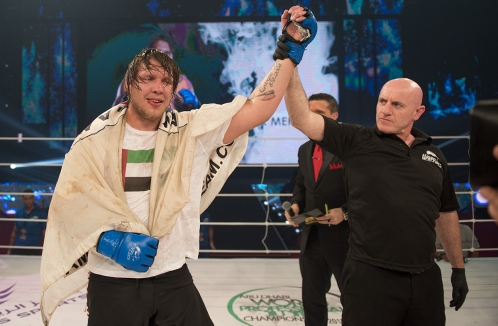 Abu Dhabi Warriors 2 fight card took some hits in final weeks prior to the event. Even the main event of the night was a victim of injuries but in the end fans were more than delighted with the outcome.

Derrick Mehmen stepped in as a replacement when Kudin's injury was too severe for him to participate at the show. Mehmen (19-6-0) went to distance against Rogers and claimed an unanimous victory in his first outing in Abu Dhabi. All three judges scored this fight in his favour (30-27, 29-28, 29-28) making this his 7th win in his last 8 fights.

This was his first visit to Abu Dhabi, but as many before him he was delighted to taste the Arabic culture at its finest.

''I was overjoyed when asked to take the fight. The time difference was an issue at first, but everyone treated us so great that it passed in no time.''

It's hard for a fighter to jump in the last minute but on this occasion Derrick didn't feel too much pressure. ''I was in full training already,'' he opened up, ''I was preparing for a fight at the end of April, so getting the call for AD Warriors 2 could not have come at a better time.''.

Rogers is a former American Top Team member and Mehmen is training at ATT at the moment. Though their paths never crossed there, Mehmen corner did help Derrick tremendously for this fight and prepared him for Rogers.

''Da Grim'' Rogers is known for his KO abilities and Mehmen is no stranger to it also. 11 out of 19 professional wins in his career came via KO and while fans in the IPIC Arena were waiting for a KO, there are some factors that need to taken into consideration.

''I like guys who stand up and bang. But I took this one on a short notice and I had to play it cautious and calculating. I'm proud and happy for my win. I'll fight anybody ADW puts in front of me. Bring me world-class fighters, I like any and all challenges!''

It looks like that even better things are coming in the future and that we hadn't heard the last of Derrick Mehmen. With a full camp he'll be a tough nut to crack for anybody in September. The future is bright for Mehmen and ADW and we are counting down the days till September.