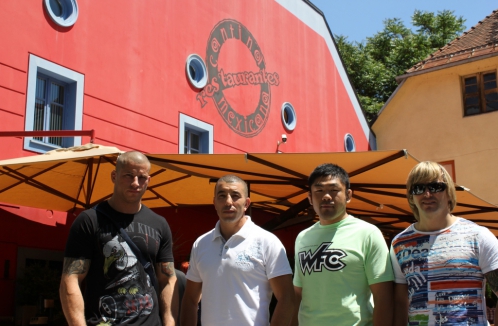 Gallery
On the 16th June WFC is coming back with a bang! For the rist time in its history Krizanke Summer Theatre will host the best fighting show in Europe.
As a prelude to the event WFC organized a meet & greet with fighters that will be in the ring on Sunday. Japanese star Yoshiyuki Nakanishi was introduced to Slovenian journalists, who also had an oppurtunity to do one on one interviews with Bor Bratovz, Primoz Vrbinc and Mury Derbal. It was held in a nice setting of Cutty Sark Pub and Cantina Mexicana Restaurant.
It has been an relaxing afternoon for the fighters as you can see from the pictures. Now we start the countdown to the main event! Get your tickets and be among the elite that will attend the WFC 18: Knockout on the 16 June at 20h.