Luka Coz: "My heart is my most powerful weapon!" 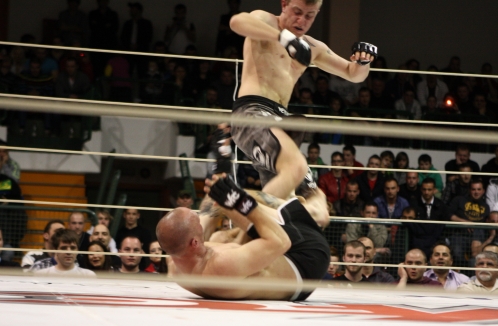 Luka Coz is already a veteran inside the Challengers ring. Challengers 4 will be his third appearance at the event which main purpose is to promote young and talented fighters from all over the Europe and beyond.

Many fighters found their spot in the WFC and became regular participants of the main events. But that was not the case for Luka who had some difficulties on his path of becoming a professional MMA fighter.

26-year-old from Slovenia is not a professional athlete but has a regular job that pays his bills. He started training mixed martial arts roughly 7 years ago. Luka has fought 5 times in his professional career and holds a record of 2 wins and 3 losses. At Challengers 2 he faced Fostagic and submitted him in the first round. But that didn’t help him in earning a regular spot on the WFC roster. "I just was not ready, then I was without a coach and just one month before the fight I trained more regularly with Bor Bratovz. I just wasn’t ready for the big leagues."

Luka has fought just two times in the last two years so we can say that Challengers 4 is some kind of a comeback for him. "After the defeat against Mezdihov at the WFC Challengers I had health problems and I couldn’t even train on daily basis. At Challengers 2 I couldn’t reconcile preparations for the event with my regular job."

Luka is not inventive with his hands only at his job but also when it comes to training. He set up a small gym at his home and there is where he mainly does his training. "After work I go running and then I eat and rest before I go to the gym. There I start with warm-up and then I train Thai boxing, wrestling and jiu-jitsu."

Coz has his eyes set on a goal he wishes to achieve. "My dream has always been to set foot on the big stage and shine in the WFC!" He surely has a heart of a lion and if he’ll a have a chance of entering the WFC, he’ll take it.

"My heart is my most powerful weapon! Anyone who watched me in the ring knows what I'm talking about," Luka invited all the fans in Litija on 16 March where he will fight against Luc Nguyen from Germany. Fight will be in the lightweight division and that is also something new for Coz who has previously fought in the welterweight division.

It will be Coz’s third appearance at the Challengers. Do you think he can make it to the WFC this time? Share your thoughts on Facebook or tweet @WFC_si.

Be a part of Challengers 4 and get your tickets at Eventim.