Kosednar: "Vaso, stop running your mouth off and get yourself ready for a beating!'' 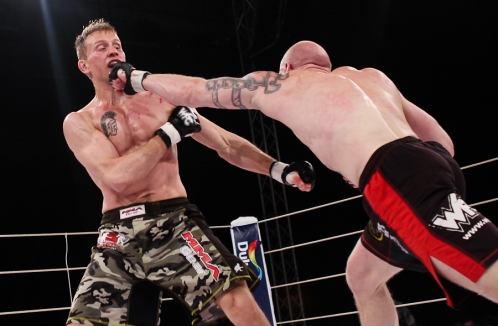 At WFC 17 fans were deprived of a very special fight. Lightweight showdown between Bojan Kosednar and Vaso Bakocevic promised to be spectacular weeks before the bout. Fighters clashed on a set of the photoshoot for the official WFC promo shoots and had to be separeted by WFC President, Mr. Mahic. Fighting sites were full of forecasts about the fight and news kept pouring from both camps. Bakocevic threatened Kosednar that he would destroy him in the ring, while Kosednar on the other side wasn't so direct.

Fans were eager to watch the battle on October 21 in Hala Tivoli but it looked like it was not meant to be. Kosednar injured himself in training and the fight had to be cancelled. There was some bad blood as Vaso doubted how serious the injury was and attacked Bojan once more via media. But Kosednar's knee injury was too severe for him to enter in the ring and the fight had to be postponed. The rest is history. Bakocevic faced Hallmann and lost via TKO in the second round. Hallmann became WFC Lightweight Champion while Kosednar and Bakocevic will battle for the title of No.1 contender at WFC 18: Knockout.

Kosednar has been a little under the radar for the last couple of months but know he's in full training for the fight against Bakocevic. "Knee does not hinder me at all, I've been in full training and preparing for WFC 18," Kosednar told us .

"A month after the WFC 17 I was already in training for the next fight but unfortunately three of my fights were cancelled. Nevertheles I was training the whole time so my conditioning is not something that can harm me."

Bakocevic questioned his explanation when he cancelled the fight. Here are words from the man himself: "It was a knee injury, lateral bond has been torn, three weeks before the fight. After a week of rehab with a therapist my camp and I decided to cancel the fight because my knee was still unstable."

When Kosednar had to pull out of the event, WFC President Mahic had a tough task of securing a proper opponent for the forceful fighter from Montenegro. Hallmann took the belt but Bojan still respects Bakocevic. "Despite the defeat I was impressed with Vaso. He showed to everyone that he's a tough opponent and I have to take him seriously."

"Hallmann is a great fighter, but I do not think about him, my only thought is Vaso Bakocevic," stated 29-year-old from Ljubljana whos only focus is on Bakocevic.  "In my opinion I am a better fighter than ever at this moment. I've never had a more professional approach to training."

"Bakocevic motivated me even more with his big mouth and I'm fully focused on my next match. I believe that he thinks the same so I have no doubt that the bout will be spectacular!"

WFC 18 will most definitely be an excelent event with number of interesting fights. Bojan had some last words: "It is difficult to predict the outcome of the match but I can promise one thing - I will try to end the fight early! I recommend Vaso that he dedicates less time running his mouth off and that he should be in the best form of his life!"

Do you look forward to this fight? What do you predict will be the outcome of the lightweight battle of the top two contenders? Share your thoughts on Facebook and tweet your view @WFC_si.