Gash Doctors: ''We are ready for a busy bloody night!'' 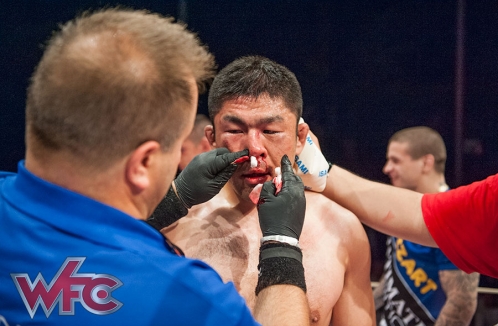 WFC takes care of its own. Inside the ring especially. Simon Haslam and Paul Barton are The Gash Doctors and they are a crucial part of WFC. WFC provides its fighters only the best and top notch bandages are a must in the world of professionals.

''I have never had a fighter break a hand, we specialise in helping fighters with hand trauma too. Our wraps protect the hands and give the fighters to confidence to release the bombs. If a fighter does get a cut, sprain, swell etc in a fight its nothing we have not seen before and can’t deal with quickly and effectively getting the fighter one more round.'', Simon opened up.

Simon Haslam, a 2nd generation cutsman from UK has been a part of the WFC for a long time. A man with a rich CV put a lot of effort in his job. He's British Boxing Board of control educated cutsman and has spent many hours with neurosurgeons understanding head trauma. That is way his experience is indispensable.

Cutsman has only a few seconds between the rounds to do his magic. Only the best can manage the job. ''We are constantly assessing the fighter during the fight and we're prepared for the break to sort the fighter out and get him back out for the next round. Much of this is a mental process calming and assuring the fighter explaining any injuries/cuts you are dealing with.''

Exploitation of Vaseline is something every cutsman and organization know about. But cutsman is in front of the ring to prevent just that.

''Cutmen apply Vaseline not the fighters to avoid another “grease gate” where Matt Hughes after losing to george St Pierre accused GSP of being greased on his body stopping Hughes taking him down. When we check fighters into the ring we check them thoroughly to make sure they are not trying to gain an unfair advantage.''

The duo will be back on August 27th when WFC returns for the 20th time. Let us all hope that it will be a peaceful night for Gash Doctors injuries wise. Cuts can be healed so get ready for war!