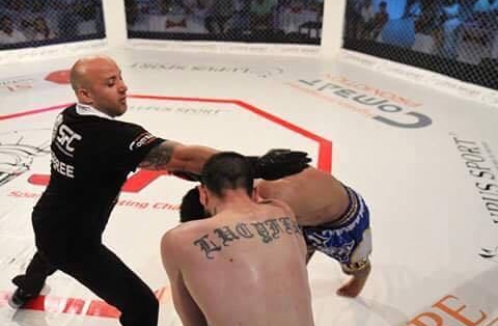 One of the toughest and exposed jobs in mixed martial arts is surely being a referee. A referee is always in the spotlight, his knowledge and reactions are on display from the beginning to the end of each fight. During which he is not allowed to make a mistake. Stopping a fight too soon can bring him anger from the fighters and the crowd, while a late stoppage can be life threatening for the athlete inside the cage. Balancing that is like walking on a rope, you need to be skilled, trained and responsive.

The WFC is bringing in all that with the acquisition of Sam Amidi from the UK. Sam ″The Man″ Amidi is a former K1 and MMA fighter that transitioned into the refereeing 4 years ago. He’s been a part of ACB, BAMMA and UCMMA among others and is coming to Austria on December 17 to referee at the WFC 21 – Olimp: Road to KSW.

When asked to describe himself Amidi was short and concise just like in the cage. ″I am one of the most active referees in the UK with a strong reputation for being quick to react and having a firm but fair approach.″, he stated.

Being a former a fighter himself the transition to the refereeing was kind of natural. Amidi used to compete in MMA and kickboxing matches with 8 fights in his career prior to calling it quits and becoming a referee. But he’s still very much in the martial arts game and he’s keeping the juices flowing with the regular Muay Thai and Jiujitsu training sessions.

″I feel as a referee it is important to have a background in MMA. This allows you to understand the movements of the fighters and where the fight is likely to go. This allows me as a referee to be in the best position possible to keep fighters safe.″

Fighters safety is always a referee’s primary concern during a fight. With the constant progress of the sport and emergence of highly talented fighters the job of a referee in constantly changing and evolving. ″I feel it is important to stay active in training as a referee as there are new moves and styles being created all the time and you need to keep up with the different styles to put you in the best position to make calls. This also allows the referee to be ahead of the fight by having that knowledge of where the fight will go. This is not to say people that do not have a martial arts background can't do it, I just think that having that knowledge allows you to read the fight better which is crucial for the safety of the fighters. You must be fully competent in the role as fighters, coaches, family, friends, fans and promoters put their trust in you to ensure fighters are safe in your hands and that they abide by the rules. These are the 2 most important elements for a referee.″

The grounds are all set. We are bringing in one of the best in the business to keep the fighters safe and for the audience to enjoy the fights. With that being said don’t hesitate to join us on December 17 at the WFC 21 – Olimp: Road to KSW and add some action to the Christmas spirit in Austria.