Draxler vs. Jankovic will headline WFC 21 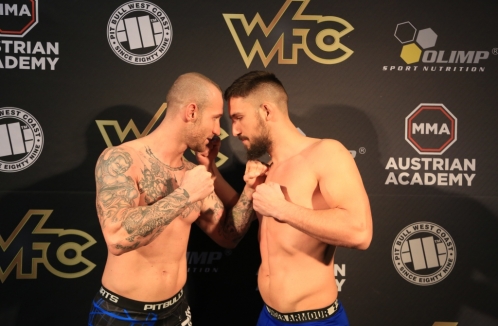 It's fight week! WFC 21 – Olimp: Road to KSW will go down this Saturday, December 17, 2016 in Bad Vöslau, Austria. As a prelude to the main show, weigh-ins will be held at the Austrian MMA Academy headquarters on Friday, December 16 at 18:00.

The event on Saturday will offer 7 intense and exciting fights with the main event headlined by the fight between Christian Draxler and Aleksandar Jankovic. WFC 21 will mark the return of the Austrian Christian Draxler who's been absent from the fighting arenas since his title fight against Bakocevic at WFC 19. Although he lost that fight back in 2014 he surprised many with his performance against the higher ranked opponent. Draxler’s homecoming is infused with immense expectations from his fans and supporters. Will he be able to withstand the pressure?

Aleksandar Jankovic from Serbia will have a lot saying in all of it as he’s coming to Bad Vöslau with one thing only on his mind. To win and build a path to KSW in the future. At only 22-years of age he’s at the beginning of his pro career but a win at WFC 21 would be a huge boost for his future in the MMA.

With only one fight that went to the distance between them this is promising to be a cracker of a fight. Don’t miss the event this Saturday and grab yourself one of the last remaining tickets. Tickets can be purchased here.