Coz embodies the true warrior spirit 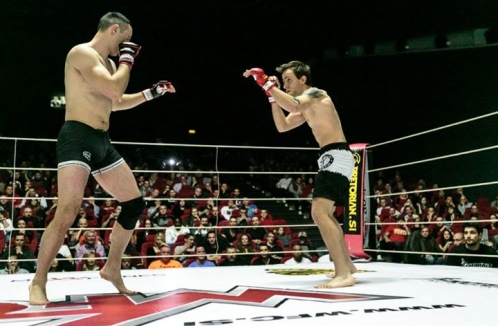 Luka Coz does not have an impressive 5-0 WFC record as middleweight champion Svetlozar Savov for example. But he has a huge heart of a champion that is for sure. His spirit hasn't been broken although he was faced with some serious obstacles in his career.

He's been on Challengers roster for a couple of times now but at WFC 19 he was given an opportunity to compete at the main event. He even trained in the US prior to the event, he shed blood and sweat in training and on top of that he worked full time to pay his bills. ''I've trained in the USA immediately after work. I've trained at Hammer Training & Fitness / American Top Team. Those were the best moments of my life! All the guys were terrific and helpful in every way. I'm in debt with them for the rest of my life. I would like to take this opportunity and thank them for everything!'', Luka passionately described his North American adventure.

Coz had some difficulties securing a flight back home and he was due to land just one day prior to the event. But in the late December usually not everything goes as planned at the airports. Luck had really left him at the end and he practically stepped out of the plane and into the ring on the day of the WFC 19. ''All this misfortune at the airports crushed me both these physically and psychologically. It was really hard for me to be at 100% after the whole airport saga. In any case, I have been without sleep but in terms of fitness it's hard to say because the fight ended too soon. At the last training I weighted at 70 kilos but before the fight I was at mere 68. It was hard to be honest.''

Coz eventually lost his fight at WFC 19 in round 1 after Kokora submitted him with a Guillotine choke. But that was not the end of the fight. Kokora acknowledged what Luka was faced with prior to the fight and applauded him that in spite of all the trouble that he was faced with he stepped into the ring. Crowd cheered for both fighters and Luka was given the moral satisfaction that he did not quit and he entered the ring in spite of everything.

''I wanted to show everyone that I was in the best shape of my life but well that is life. I would like to thank everyone that supported me my whole career, Rodney Guignet and Carmelo Marrero who accepted me in their team and of course Mr. Mahic, WFC President, who gave me this opportunity.''