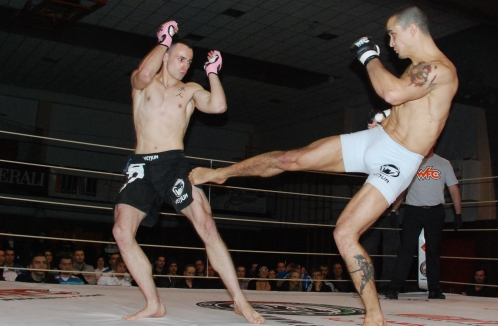 Relentless punches from Campascha Kantaev were the key to his first round win in the main event of the evening. Ground and pound from Kantaev was too much for local hero Luka Coz who left the ring with disappointment and a broken nose. Surely we will see him back in action quite soon.

Primoz Vrbinc made sure that the home court advantage counted for something. He got his spot on the fight card as a replacement and made a spectacular return to the WFC after his first round armbar against Kokora from Serbia in less than 2 minutes.

Third Slovenian that entered the ring got his win after a technical decision. Rok Kokotec won due to a verbal tap-out from his opponent Alic, who complained of ill-health and surrendered prior to the fight.

On a night of first round endings the fight between Poschner and Mordan served with round number two. After a close and tied first round where we saw a lot of fighting on the ground, Poschner showed us his technical skills and took the victory when he submitted Mordan with north-south choke.

Claudio Conti and Jusuf Hajrovic from Serbia went the distance and battled for the whole three rounds. Italian Conti was dominant through all three rounds but could not finish the resilient Serb who was on his back most of the fight. Audience applauded to both warriors at the end but it was Conti who was more effective and judges gave him a victory after a unanimous decision.

Fight number five was the fastest ending fight of the night. Branimir "Gorilla" Radosavljevic proved to be too much for Minel Becirovic who he knocked out in just 10 seconds of round number one! Truly a stellar performance by Radosavljevic that got the crowd on its feet.

Featherweight fight between Gagaev and Puggioni was an intense battle of two well-conditioned fighters. Puggioni got a bit carried away during the fight and head-butted Gagaev. He received a yellow card and a warning from the referee, Mr. Grant Waterman, but no bad blood got spilled between the fighters. Gagaev surprised everyone in the Sport Hall as he submitted Puggioni in round 1 after a series of fierce punches from the young Italian.

Miro Jurkovic from Serbia got his win after 70 seconds via submission. He took the back of Basic and ended the fight with a rear naked choke.

Young Austrian, Joachim Wüstner, won his debut fight at the Challengers with a triangle choke. Antonio Majksner from Croatia could not defend the submission attempt from the Austrian and lost via triangle choke after 3 minutes of round 1.

In the show opener, Aleksandar Rakas scored a first round submission victory against Arber Murati from Italy. A deep armbar left the former with no option but to concede. It was Aleksandar’s second victory on the Challengers.

Challengers 4 one again proved to be a stepping stone for many of contestants as they are on the verge of becoming professionals. We have seen talent, rough power and finesse skills on a night when mixed martial arts returned to Litija for the third time in less than two years.

Who would you like to see on the big show? Do you think that there are fighters that deserve an opportunity at the main event? Tell us what you think on Facebook or tweet @WFC_si.

WFC will be back on 21 April with WFC 18 in Ljubljana. Get your tickets at Eventim at a special discount until 1.4.2013. Follow WFC.SI and our social pages for detailed info. See you in Ljubljana!