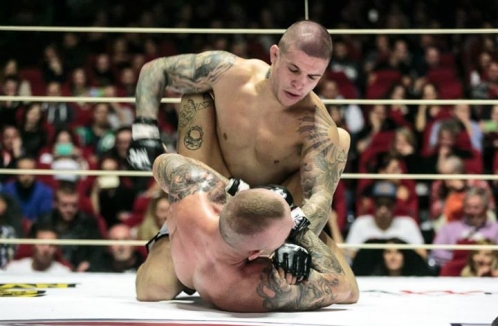 All top level athletes strive for higher and higher goals as they pour their body and soul into every day’s training. They breath, eat and live for their goals and Vaso Bakocevic is no different from the rest.

''I always train hard and this time it's not going to be any different. I want to have the best camp possible, my plan is to go to Sweden to prepare for the fight at Allstars gym, the home of well-known Alexander Gustafsson.'', stated Bakocevic.

He's so eager to fight that sometimes he takes on fights that he's not prepared for. That might have cost him a more stellar career score but it also shaped him in a man he is today. ''I train all the time but sometimes my body is just not rested enough. This time I'm changing the routine.'' Bakocevic will have a 3 months break between his last fight and the AD Warriors appearance.

He might gain some serious weight in the meantime but don't be fooled that we're talking about bad habits. He's used to having 85+ kilos between fights and then he cuts it down to 70 or even less. This time he'll be fighting at the lightweight limit so he'll have to cut around 15 kilos prior to the weigh-in.

''I am used to it. It's not easy I put a lot of effort into it and it exhausts me, but the final result is worth all the hustle. I'm able to gain over 10 kilos overnight and on the fight day I enter the ring way stronger than my opponent.''

Vaso is known for his flashy moves that bring the crowd to its feet. He's definitely a crowd pleaser and a showman. He's coming to UEA to put on a show and notch another career win. ''I don't care who I'll face in the ring! I have only one goal in my mind and I'm determined that I'll win this fight.''

At 25-years of age he’s got a lot of experience in the business and is eager to show it. You won't have to wait much longer as AD Warriors 2 approaches. Set for March 26, 2015, AD Warriors 2 will be an event that will mark a milestone in the rich Abu Dhabi history. You are welcome to be a part of it! Get your tickets at Virgin Megastore. Follow our website and social media pages for additional info.