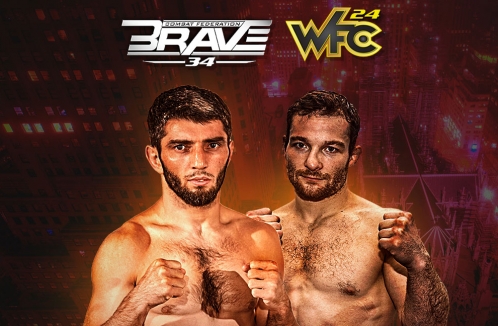 Velimurad Alkhasov is set to make his much-awaited return to the BRAVE CF cage and he will get the spot at BRAVE CF 34 / WFC 24, which takes place in Ljubljana, Slovenia, on January 19th, in partnership with leading local promotion the WFC.

The Russian powerhouse will welcome former champion Zach "Fun Size" Makovsky, who makes his BRAVE Combat Federation debut. Alkhasov is undefeated for BRAVE CF and in his professional career. The Sambo world champion has beaten Sean Santella and Marcel Adur, with the last one coming in a title bout, at BRAVE CF 18. However, Velimurad was unable to get the belt, as he missed weight for the fight. After taking 2019 off, Alkhasov looks to build himself back towards the top title contenders, as he takes on a veteran of mixed martial arts in Zach Makovsky.

The American Flyweight was once a Bantamweight champion for Bellator, as well as having stints with the UFC and ACB and will look to add a world championship in his new weight class for BRAVE CF. Further bouts will be announced in the coming days, as fans can expect another stellar card to kick off the new year and the partnership with WFC in style.

BRAVE CF 34 marks the first time the fastest-growing MMA promotion in the world lands in the Balkans region for an event, and Slovenia will be the fourth European country to host a BRAVE CF show, after Northern Ireland, England, and Romania.