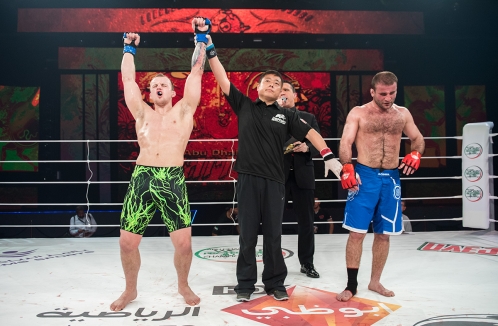 Three bonuses were awarded at AD Warriors 2: Jesse Ronson got Submission of the Night. Fight of the Night honours took Lowe and Teodorczuk. Wallhead was awarded with the KO of the Night.

Canadian lightweight Jesse Ronson banked the third bonus for submitting Gadji Zaipulaev from Russia. Ronson (15-5-0) is a familiar name to the North American mixed martial arts fans and a former UFC fighter. At AD Warriors 2 he went up against a really tough guy from Russia who was on a 8-2 run in his last ten professional fights.

Both fighters delivered premiere fighting spectacle worthy of the event. Both Warriors had their moments of domination through both first two rounds. We've seen it all. Spinning kicks, armbar and kimura attempts, knees and high kicks – the whole package.

No one couldn't say that Zaipulaev didn't performed on a level worthy of the event. But Ronson was just plain better on that night. All rolled out pretty quickly in the Round 2. Zaipulaev went for kimura but Ronson reversed out and hit him with a knee. Nevertheless that it connected, Zaipulaev didn't surrender, but it might just rocked him enough that he made a mistake. When both Warriors were on their feet, Ronson showed a bit of magic, he clenched his hands around Zaipulaev's neck while standing on his feet and forced Gadji to tap out.

The West won this time and Jesse Ronson demonstrated his superior knowledge of various techniques and that he's an all-rounded MMA fighter. Not only a fighter, he's a Warrior!

Check out other Warriors on Facebook and Twitter and stay up to date with the latest news.