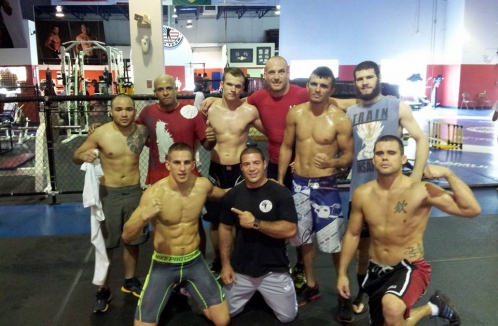 Bojan Velickovic made quite an impact at WFC 17 nearly a year ago. His debut was not a walk in a park but on the other hand it just shows what kind of fighter he is. He went into the ring strong and determined and that nearly cost Bulgarian Svetlozar Savov his belt.

With a spotless 6-0 score at the time ''Veli'' was no pushover and he battled with Savov for whole three rounds. He lost after the judges decision but nevertheless he put his name on the map. He's 2-1 since then and on a mission to improve as a fighter.

What better way to do that than in USA in one of the best teams in the world - American Top Team. Velickovic is training hard in Miami determined that he'll return as a better fighter. ''I came to ATT to do what I like best and that is to train with the best in the world,'' Velickovic justified his decision. ''I feel, no let me rephrase that, I know that I'm improving every day.''

Velickovic and Brett ''Da Grim'' Rogers in the ATT gym

Velickovic can rely on top condition and martial arts trainers and on top of that he ha san opportunity to train with fighters like Brett Rogers who fought with creme de la creme of MMA, Overeem and Emelianenko. We won't have to wait long to see the results as Veli will soon return to the ring to prove to everyone that he belongs to the very top.