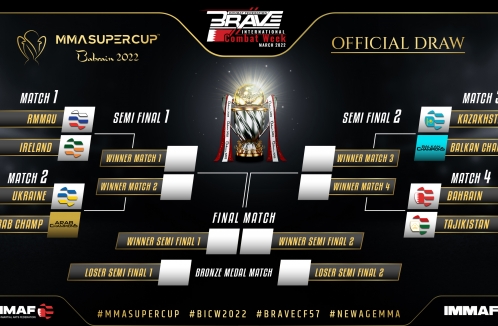 The MMA Super Cup was designed to pit the strongest amateur mixed martial arts teams in the world against each other for a chance to bring home some of the  $225,000 prize money allocated for national mixed martial arts federations.

Following the official draw which took place on February 7th in the Kingdom of Bahrain, the Russian MMA Union (RMMAU) Head Coach Gennady Pavlovich Kapshay revealed the team line-up for their much anticipated opening match against Team Ireland and referred to one of the wildcards of the MMA Super Cup, Team Balkans, as the dark horse.

“I can't hide the fact that we were lucky with our rivals in the qualifying stage, in the another subgroup three strong national teams of Bahrain, Kazakhstan and Tajikistan will meet at once,” says Kapshay.  "The dark horse, in my opinion, will be the Balkan Champions.”

During the draw, it was revealed that the Balkans Champions team will be facing Team Kazakhstan in the quarter-finals.

Team Kazakhstan is one of the leading teams in the International Mixed Martial Arts Federation (IMMAF) world championship. Since 2019, Team Kazakhstan has secured 67 medals in the IMMAF World Championships - 12 Golds, 22 Silver, and 33 Bronze.

Nevertheless, Team Balkans has the  advantage of selecting the best fighters from the region to showcase to the world the high-level of skills these small European countries contain.

The fact that the head coach of one of the toughest amateur teams in the world pinpointed them as “The Dark Horse” alludes that there are plenty of surprises coming our way from the wildcards of MMA Super Cup.

MMA Super Cup will take place March 8 to 12 in the Kingdom of Bahrain as part of BRAVE International Combat Week. The week will also feature BRAVE CF 57 on March 11 where 3 world championship titles will be on the line.

stay tuned for more about MMASUPERCUP